The PM has announced a that a new fourth tier of coronavirus restrictions will be introduced, which compromises Christmas Day plans for those in the South East.

Speculation had been growing as to whether Boris Johnson will ‘cancel’ Christmas by doing a U-turn on the Christmas guidelines already set out (limited freedom between 23-27 December).

But during a press conference a little after 4pm today, the Prime Minister announced a new ‘Tier 4’, which will roughly replicate the rules set out by the Government during the second lockdown in November. People are being to told to stay at home in Tier 4 areas.

Justifying his decision, he said that a new strain of coronavirus had been discovered, which was particularly prevalent in the South East of England. He added that, while it was not thought to be any more deadly or resistant to a vaccine, it appeared to be about 70% more transmissible.

This means those in Tier 4 areas must abide by stricter rules and not be able to see family or travel outside Tier 4 zones. The new restrictions will come into force from midnight tonight.

The following areas are affected: 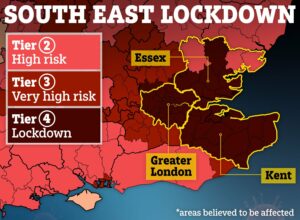 Christmas plans have also been restricted for those in Tier 1,2 and 3, as households will now still be allowed to mix, but only for Christmas Day.

Previously, the Government’s plan was to allow the public to mix with two other households to celebrate Christmas from 23 December through until 27 December.

This decision comes as Chancellor, Rishi Sunak, recently announced that he would extend the furlough scheme until April.

The decision announced by the Prime Minister came amid speculation of a third wave of coronavirus and subsequently a third national lockdown loom.

The Scottish and Welsh devolved administrations have also announced their intention to roughly mirror the same arrangements.