There has been a fire at a former military barracks housing asylum seekers, which had recently been hit by a Covid-19 outbreak with around 120 testing positive. The Home Secretary has issued a statement.

A fire has broken out at a former army barracks site in Kent, where hundreds of asylum seekers had taken refuge. Napier Barracks in Folkestone has been pictured with heavy smoke billowing and alarms ringing.

Care4Calais, a migrant charity, said “A fire has broken out and fire engines have been called to Napier Barracks in Folkestone following an upsetting afternoon for the residents.”

A fire has broken out & fire engines have been called to Napier Barracks in Folkestone after an upsetting afternoon for residents.

They received notice via impersonal letters from accommodation provider Clearsprings of a split to new ‘bubbles’ to self isolate for 10 more days. pic.twitter.com/6AXpdFU9Hd

There are around 400 asylum seekers who live at the military site, and 120 of those have recently tested positive for Covid-19. Over 18,000 people previously signed a petition to shut down the barracks due to the conditions inside them, with many asylum seekers complaining publicly about the site.

The cause of the fire is currently unknown, but it comes after a day after protesters were seen throwing buckets of fake blood outside a large set of double gates at the site. The demonstrators were holding placards calling for the barracks to close.

The Home Secretary, Priti Patel, has issued a statement on the matter, laying the blame at the door of the asylum seekers concerned: 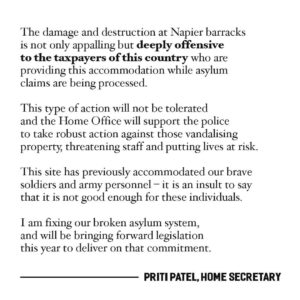