The Argentine Army posted a photo that claimed the Falklands belong to Argentina despite the democratic views of Falklands islanders.

On Wednesday (15.07.20) the Argentine Army posted a number of photos on Facebook showing their soldiers conducting winter training in the Argentine countryside. This in itself is nothing unusual; social media is now a critical platform for keeping people informed about the actions of the armed forces. What was unusual is the photo that shows a group of soldiers in the snow walking past a sign emblazoned with the words, “Las Malvinas Son Argentinas”. It probably does not surprise many people that Argentina still claims the Falklands despite losing the Falklands War 38 years ago, so the question that seems pertinent is; why?

Scroll down to see screenshots of the comments trolling Argentina.

The Falklands were first discovered by Magellan on one of his voyages to the new world sometime in the 16th century. A number of other European explorers from many nations then, in turn, came across the islands over the following two centuries. The first colony was established on East Falkland in 1764 by the French. However, this was unknown by the British and they established a colony on West Falkland in 1766 believing they were the only settlers on the islands. Also in 1766, the Spanish crown asked the French to leave the islands because they believed them to belong to Spain due to their proximity to their South American holdings.

In 1767 the Spanish formally took control of the islands and renamed the French settlement from Port St. Louis to Puerto Soledad (Port Solitude). By 1770 the Spanish became aware of the British presence and tried to force the settlers to leave, almost sparking a war. This was prevented and the colony continued until 1776 when the British government withdrew the military force to help fight the American Revolution. The Navy left a plaque asserting continued British sovereignty over the islands. Spain continued holding the islands until 1811 when they also withdrew their military forces in order to help fight the peninsular war, they also left a plaque claiming sovereignty.

The islands were then claimed by the United Provinces of Rio de la Plata and attempted to administer the islands by setting up penal colonies. They all failed because the guards mutinied against the commanders and killed them. The United States also conducted raids on the failed colonies.

Argentina inherited the claim over the Falklands after the collapse of the United Provinces in the 1800s.

Argentina attacked the Falklands in April 1982 and were beaten in 10 weeks, losing over 600 soldiers in the process.

It is widely accepted that the Argentine Junta attacked the islands in order to deflect the public’s attention away from the brutality and failure of the military regime. The loss of the war also brought the downfall of the Junta and the establishment of Argentine democracy.

Despite losing the war Argentina continues to claim the islands. This is following a democratic referendum in 2013 whereby the islanders voted to remain British. It is also worth mentioning that Argentina sees the population as ‘planted’ and therefore their democratic wishes can be ignored.  So again the question remains as to why.

As you can see below, the posts by the official Argentinian Army Facebook page received hundreds of comments. 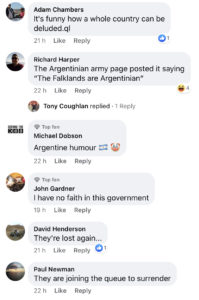 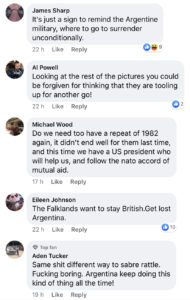 The simple answer is that the government uses the islands as a distraction to stop the Argentine people from focussing on the problems in their own country. The idea that the Falklands are Argentinian is reinforced by cartoons for children that spread false narratives about the Falklands war. Signs like the one seen in the facebook post are spread around the country reminding the people who the Falklands supposedly belong to, further breeding the lie that has existed for almost 200 years. 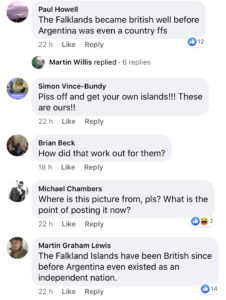 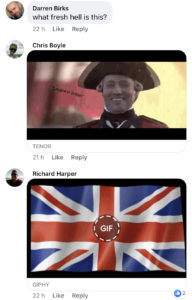 This chronic denial of the truth only serves to deflect the anger of the citizens of Argentina and keep the government in power, Argentina doesn’t actually want the islands because then they’d lose their scapegoat and the people might wake up. In summary then, they maintain the claim to keep people distracted and angry; because if the population only looks outside, they never see the enemy within. 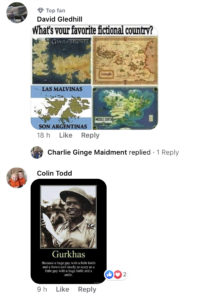 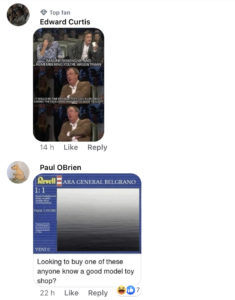 If you wish to see the post by the Argentine Army you can so here.